While digging through some old boxes I came across what I believe is the last remnant of my first computer. It’s a Western Digital Caviar IDE hard drive, with an impressive 2.5 gigabytes of storage. My first computer actually shipped with a 4 Gig drive, so technically this is just an add on component, but still it brought back some good memories. Before I had to use the family computer but this PC was set up in my room, which is a huge bonus when you're a teenager. 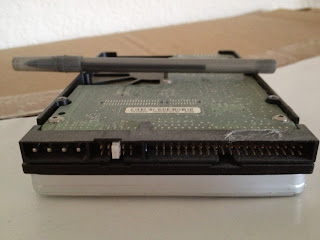 Here are the stats that I can remember from “Old Faithful”

The video card was probably the weakest part of this system, running 3D games was never guaranteed. I can remember never being able to get the Quake 3 demo to run. The modem was also a real piece of work too. That POS would always drop my connection when I was in the middle of an online game.

My dad purchased this computer when I was 14 and just starting high school. I had to pay half the price tag, which I believe was around $700 or so. This agreement came about when I was 13 after I told my parents I wanted to save up my money to buy a computer. My dad, who had a few beers in him at the time, had said that if I could save up half of the money he’d pick up the rest. Motivated by the idea that I only needed half the money, I signed up to do a paper route to raise the cash. This took a while because the paper route only paid around $50 - $70 a month, and it was a real pain in the ass to get up every morning and distribute papers around the neighborhood.

Old Faithful really isn't an accurate name for this PC. The Windows 9X line of operating systems were notoriously unreliable. The blue screen of death was a constant visitor during the best of times and I didn't help matters by always tinkering with things and running various games that always pushed the system to its limits. In fact I think Old Faithful didn't even last three full years before suffering a catastrophic failure. Fortunately by that time my dad didn't make me work another paper route before getting a new computer. We ended up building Old Faithfull's replacement from a bare-bones kit, but I'm going to save that for another article.