Moleskine is a brand of paper notebooks that's known to produce a quality writing product. Not too long ago they teamed up with Evernote and created a "Smart" notebook that's supposed to merge the worlds of digital and physical note taking. The idea is that you do your note taking the old fashioned way with your Moleskine Smart Notebook,then later you can use your phone to take a snap shot of the page and save it as a note in Evernote. Your written notes are saved as a digital photo and Evernote runs some handwriting recognition on your notes so you can use Evernote's search function to find any keywords in the snapshot. You also get a pad of stickers you can use to tag your notes. The stickers are recognized by Evernote so you can look up notes and organize them based on the sticker you used.

Originally I thought the handwriting recognition meant that there would be an option to transcribe the written notes into digital text, but it turns out I was mistaken. Apparently after doing a little research it turns out that is a feature which is just a little too advanced and not accurate enough to be useful. Evernote get's around the accuracy issue with its search function because the function doesn't have to worry about piecing together a coherent sentence. If the software looks at something you wrote and decides there's multiple things it could mean it can just add them all to its list of keywords instead of trying to figure out which word is the most likely word you meant to write. Unfortunately this means that if you want any of your physical writing on digits you'll need to type it up yourself like you would with any other "dumb" notebook.

So basically the Moleskine Evernote Smart Notebook is really only smart about giving you a digital backup of all your hand written notes. How useful this is to you really depends on how much you enjoy writing things by hand. Also the other big advantage is that everything you save to Evernote is now in the cloud and can be accessed anywhere from your phone, computer, or tablet. Evernote is pretty good about providing an app for any device you might have.

Below is an example of my first test note. 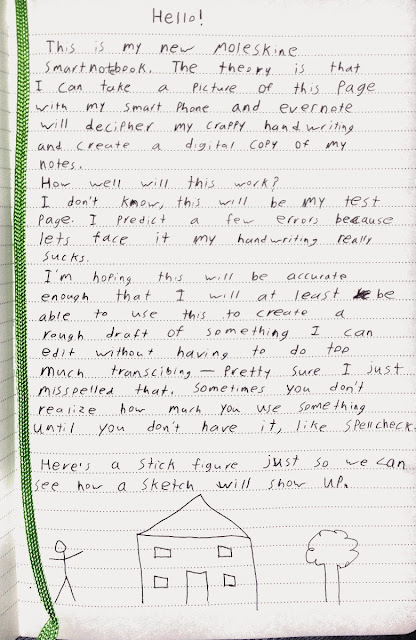 When I wrote that the original idea was to translate that page into digital text and then compare the two in this article. Naturally I was pretty disappointed to discover that feature didn't exist. Not sure if this was a result of Moleskine and Evernote over hyping their product or me just reading into it more than what actually existed. Perhaps it was a little of both. I really did want this to be a super notepad that would allow me to naturally hand write notes into my computer, and Moleskine really did want my money.

So, was this a wasted purchase? That depends, the Moleskine Evernote Smart Notebook sells for around $20 at Amazon, which is really expensive for a notepad, but it does come with a code that can be redeemed for three months of Evernote's premium service. This service is about $5 a month so that technically brings the notebook down to only $5. I said "technically" because the three month code would only be of value to someone who is a fan of Evernote and actually wants their premium service, otherwise your paying $20 for a freaking notepad. My recommendation would be to play around with the free version of Evernote first and decide if you like the service enough to want to start storing your physical notes their too.